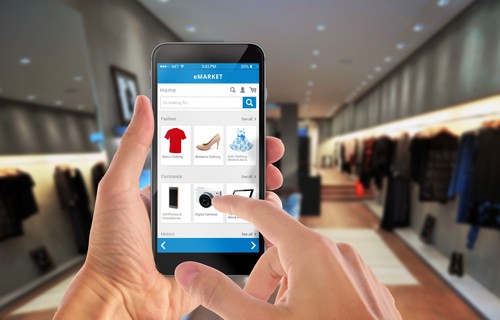 What Are the Trends Behind Mobile E-Commerce?

Mobile e-commerce continues to grow year by year, and it’s no surprise that people are browsing and shopping on mobile more than ever before. To keep up with the latest trends in mobile e-commerce, consider the following stats about the current state of online retail.

Over half of individuals ages 25-54 say that online shopping is their number two online activity behind social media. In February, 2015, IBM reported that mobile traffic accounted for 46.5% of all online traffic (during the Valentine’s Day buying season). However, actual sales were only made on mobile devices 23.2% of the time, leaving PC in the lead for online purchases.

On the other hand, Retail Me Not reports in their 2015 mobile retailing whitepaper that most sales still occur in brick and mortar stores. In 2015, online sales accounted for 13% of all retail sales in the United States.

This number is on the rise, though. In 2016, online sales will account for 14% of all retail sales in the U.S. according to estimates. Of those sales, it’s estimated that mobile will make up half of them by 2017. Since 2013, online retail sales have grown by 341% in the U.S.

As IBM reported last year, smartphones were the leading browsing device for e-commerce sites. Smartphones accounted for 33.7% of all online traffic; whereas, tablets only accounted for 12.4%.

However, online sales were higher for tablet users. Tablets drove 12.4% of all online purchases while smartphone users made up a trailing 10.7%.

Tablet users are also more likely to make larger purchases, averaging $98.56 per order while smartphone users average $92.37 per order. Not too much of a difference there, but still notable.

iOS users also spend more on each purchase, typically shelling out $99.92 per order. On the other hand, Android users average $78.63 per order.

Mobile Shoppers Are Using Their Devices for Retail Research

As Retail Me Not reports, mobile shoppers are using their devices to:

In the U.S., the most common shopping activity on mobile devices is reading product reviews, something 85% of people admit to doing. In Europe, the most popular activity is comparing prices, which 77% say they do.

Digital Downloads Are the Most Popular Mobile Product

When it comes to what people are buying with their mobile devices, digital downloads take the lead. This includes products like music and digital subscriptions. Fashion — including apparel and accessories — comes in second while books, DVDs, and other entertainment come in third according to Retail Me Not. This trend is consistent across all countries studied, including the U.S., UK, Germany, France, Netherlands, and Canada.

U.S. Mobile Retail Is Ahead

There’s no doubt that mobile e-commerce is growing. One estimate shows that in 2018, mobile commerce alone will match sales of all e-commerce transactions of 2013. We are looking forward to seeing more and more businesses adopt mobile strategies in the coming years.

Are you interested in finding out the mobile e-commerce trends specific to your customers? Talk to Luth Research about their ZQ Intelligence tool.